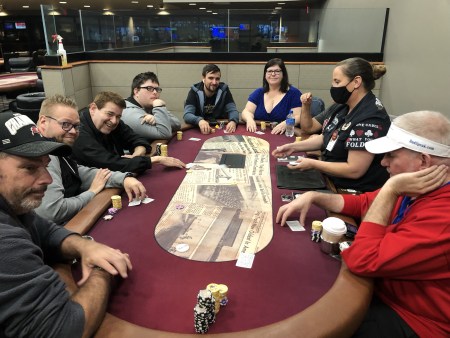 Chrissy’s KK was good and we had our final table!

Matt Trizis was out 9th!

Mark Wiser got no callers.

Derek was out 8th

Andra was out 7th

Michael Laake was out 6th

In the end Dave Bennett (Chrissy subbing) and SuperDave Kaucher each received $1370 each in a chop and Marvin Karlins, Mark Wiser and Jeff Gordon each received $1000. Those funds will be used to play an event locally or in Vegas with the summer league qualified members sharing 10% of any winnings.