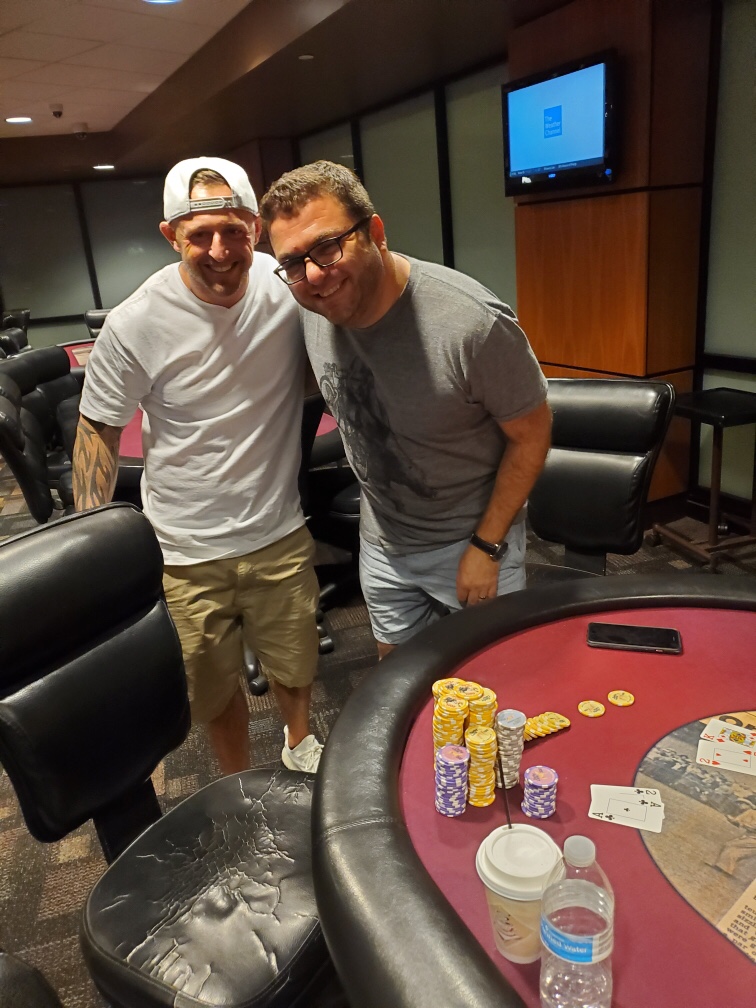 Within the first ten minutes of the evening Rob Benford had AA twice at the feature table. “Better at 100/100 blind level than later in the night” Andra told him, worried about his 7 pair of Aces night in a past game and asking for a table change (which isn’t allowed in the league).

Soon after, Clive had quads! > Alan who said he had the Jack and knew to get away and live to see another hand.

Meanwhile at the outer table… Jason raises from the button with 5-8 off (I’ll leave the speculation as to why to your imagination) Doc Brown gets extremely unlucky by getting there with the nut flush, with “there” not being quite good enough. Jason scooped the pot and said “SHIP IT” very loudly.  The players noted that there should be a penalty for unsportsmanlike conduct, but Jason is known for his antics and the league has some leeway.

In another hand Gerry Siliva raises and Matt calls with 66. Just like Doc Brown, Gerry got there, similar to Doc, “there”  was not good enough when Matt got the full house.

Back at the feature table Rob straightened out against Clive, the AA run was over but Rob still got his double up.

Andra, who was down for the evening and was really hoping to chip up, had KK.  Ed Vanlandingham had the same hand and they chopped.

Gerry AK vs Andrea Ruosi’s A-5 was no good when Andrea, who was running like Mike Postle, got his wheel.  Gerry was out.

Andra 66>Steve Trizis AQ(?) For the knockout. He grabbed the camera, tied it to a cement block & threw it off a dock into the ocean, so no picture.

Dave and Chrissy were out!

The flop was a K, the river gave Andrea Ruosi the flush and Allen was sent to watch Sherry play…  Like I said, Andrea running like Postle.

Andrea Ruosi > Alan for the knockout.

Matt Trizis KJ > Jason Barnett J7 to knock the, as of week 11. season leader out!  Matt shouted “SHIP IT” just to get a dig in.

The Final Table was now set!!!!

Sherry out 10th.  She’s made final tables 6 times this season and we have 9 more weeks to go!

Clive short stacked with AQ > Andrea Ruosi’s JJ for a double up.

Andra’s AK bested Ed Vanlandingham’s hand for the knockout. Ed out 9th.  She’s polite and did not say “SHIP IT”.

Clive A5cc > Andra A4, Andra out 8th.  Andra’s made 7/12 final tables this season and is currently 5th on the season leaderboard.

Matt Trizis, one of the bigger stacks at the final table start couldn’t hold on and was out 7th.  Matt is 3rd on the leaderboard and has made 7/12 final tables this season.

Gene, after a few doubles kept him going at the final table, was out 5th with A9 vs Fils AQ.  Gene has 6/12 final tables this season and moves up with this week’s play.

In a key hand, Derek’s Q10 vs Clives’s T7 vs Fil’s 99 with a flop of T84 had all of the final three all in. Derek scooped with QT leaving him dominating heads up with Fil Khavin, an area notable. Clive was out 3rd and moved up on the leaderboard with this week’s finish.

The league standings page now shows how close the points are between the players.  With 9 weeks left anyone can still take over 1st and several players will get Main Event packages!  Everyone is still in it!  Attendance is crucial these last 9 weeks!