Week 10: Ann Gove and Matt “Not Steve” Trizis chop it up!!! Jason Barnett tops the leaderboard! 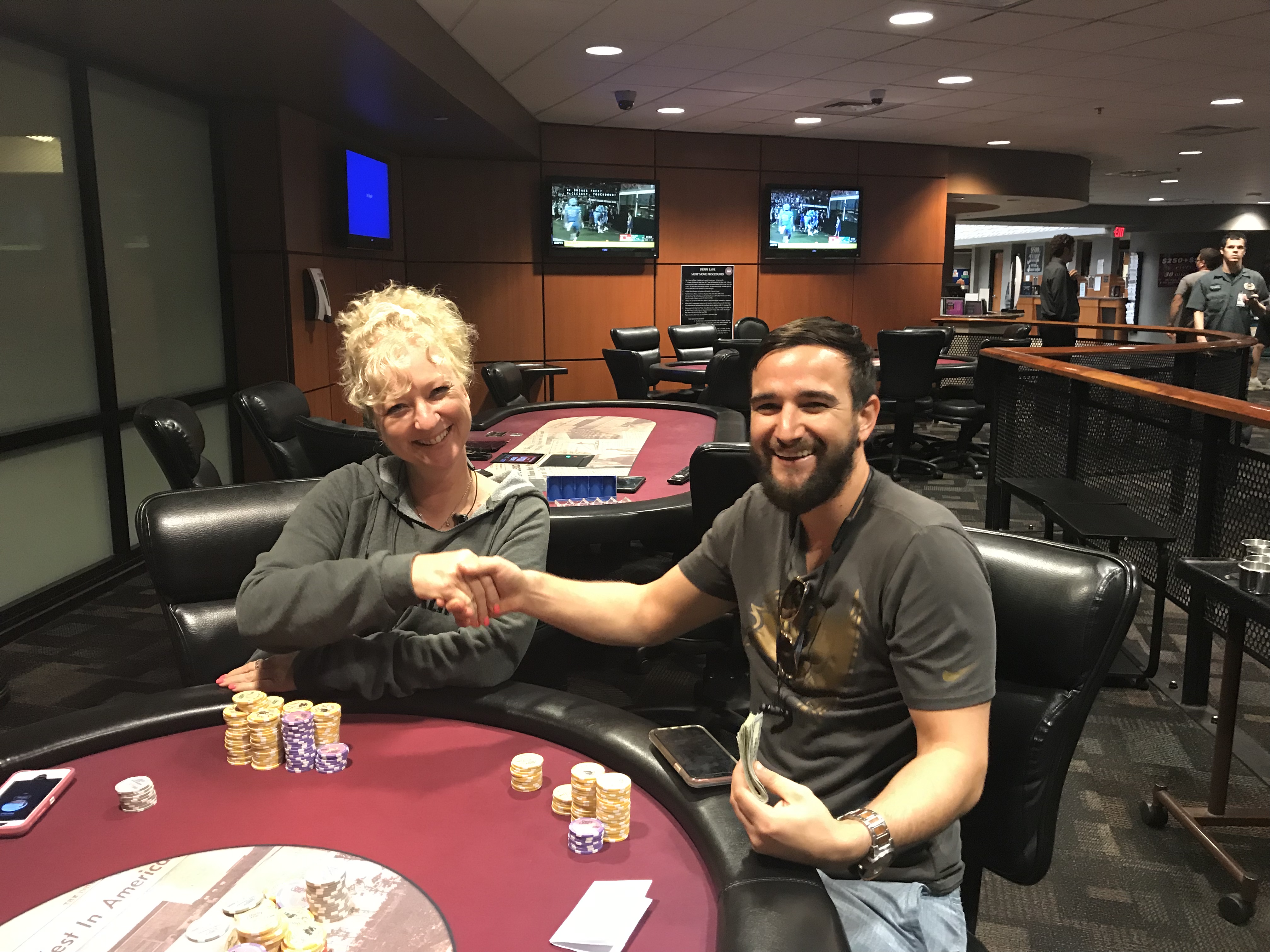 The leaderboard saw some more changes this week but no change on top where Jason Barnett, a past season Main Event seat winner with the league, dominates the league with 74 points.  Fil pulled ahead of Allen Wiseman with his 3rd place finish this week to take #2 on the season leaderboard.

This week, however, was all Ann Gove as she built a wall and dominated the field.  She had a chop a couple of weeks ago and this week chopped with Matt Trizis.

Steve “The Godfather ” Trizis returned from his world travels this week to find himself at 10th place, tied with Andra Zachow and her beloved husband Mark Winchell.  This was before week 10 changed things.  Steve was not so lucky this week.  In a twist of normal events, Sherry Wiseman cracked Steve’s AA.

Clive vs “Bob the Donkey “

Bob tripled up through Muscles & Allen

Fil 88> Derek KJ for the knockout

Andra KT>Fil 77 > Allen to knock out Allen and chip Andra up.

Andra Zachow’s AA>Bob Scholz’ KQ for a double when the board paired to counterfeit Bob’s flopped two pair with a  on the flop and turn.

Bob AJ>Sherry TT for a double

Sherry A8>John 45 for a double

Matt 67♥️♥️>Jason AQ for the knockout

Ann 77>Andra 9T for the knockout.  Andra flopped two pair but Ann’s 77 gave her a straight on the turn.  This knocked Andra out 5th leaving Sherry, short stacked, in the money.

Matt A8>Fil QQ for the knockout in 3rd.

Matt & Ann agreed to a chop!

Week 8: Peter Pompeii is our winner
1
Week 7: Shawn O’Brien gets the win!
2
Week 6: Bad beats, more substitutes and a win for Eric Buel!
3
Week 5: The Substitutes
4
Week 3: Jim “JDawg”Collins still tops the leaderboard after a chop with Ed VanLandingham!
5
Opening Night Chop!
6
Two weeks at the 2022 World Series of Poker
7
Two ETBPL Alum have made it to day 5 of the Main Event!!!
8
WSOP 7/6/22 flight 1D!
9
Week 20!!!! Austin Fowler is our Grand Champion! Five ETBPL Members playing the WSOP Main Event!