Week 7: Ann and Doc B Chop it while the Godfather is away! 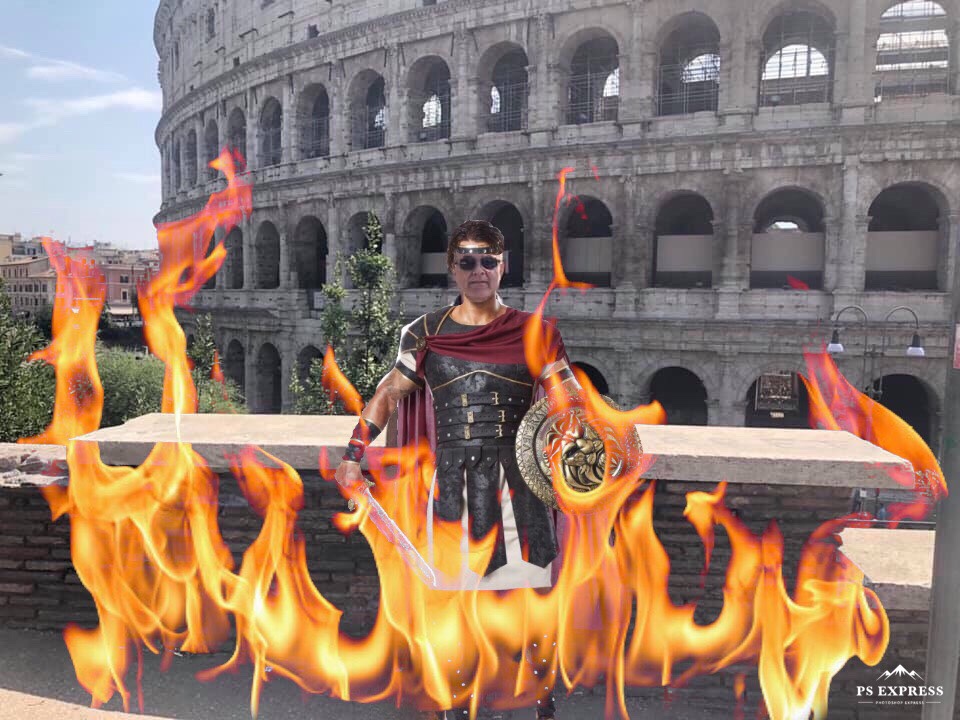 Although the chief commander aka Godfather of the League Steve Trizis was on the other side of the world, or Italy, play went on without him.  Steve selflessly is taking a full

three weeks off of the league to give the rest of the league a chance, sort of like handicapping in bowling.  While in Italy he tossed a lira in the fountain, again being selfless, and wished for the Hurricane to change course instead of for good luck for himself.

We certainly missed him this week.  Sort of.  Maybe.

Early in the evening at the feature table two of our newer members were all in. Ed Vanlandingham’s AJ prevailed over Andrea Ruosi’s 67♠️♠️ sending Andrea back to the window.

In a key hand at the outer table SuperDave Kaucher’s 88 bested Rob Benford’s KQ for the knockout.

At the feature table Twitch shoved 10K all in preflop  and Andra called for most of her stack when she snap called with her AKo.

Andra then had a shitty 33> Jason QQ to double up her short stack as payback for Jason’s shitty 55 last week.

Bob “95suited” Scholz (Twitch has Christened him with his new league nickname) later busted Andra with 77 when he flopped a set over her Middle pair sending her to the 1/2 cash game table (she later recouped $42).    Matt Trizis felt bad for her and offered her free breakfast at the Country Skillet stating “with my Dad away I can give away as much as I want!”.

Mark then sucked out with A2 > Matt AK for a double up.  Matt immediately recinded his free breakfast offer to Andra as she is married to Mark.

Sherry was all in with A6 and Doc Brown called with a monster as usual – A4.  Sherry got her double up!

Allen 99’s bested Matt’s KJ♣️♣️ to bust him earning Allen a lifetime ban from Country Skillet.  Sherry too.  With Steve T gone it seems this whole “in charge” thing has really gone to Matt’s head.

We now had our Final table featuring three of the best lady players in the Tampa Bay area, Ann, Chrissy and Sherry.  Considering that there are about one lady for every 20 male live poker players in general (though maybe not quite that bad in the Tampa Bay area) this shows how amazing the TBEPL lady members are! The term #slaytheboys may have been overheard as they combined into the final table.

Chrissy doubled through Sherry with AT over AQ♥️♥️ when she rivered her 10.  Chrissy has made a rarely duplicated 6 of 7 final tables this season.

Sherry’s AQ did not hold up against John “Muscles” Gordon’s J9 and she was out 10th due to variance.

Jason Barnett jammed 11k with KQo and Mark Winchell rejammed with AA. Again variance stepped in with Kflop and Q river.   Mark jumped up knocking over his chair and stormed off to cool down.   The players were not shocked as he’s known for his volitile temperament.  He still had chips but he did block Jason from texting him, unfriended him on facebook & unfollowed him on Twitter.

Doc Brown’s  KK overpowered Chrissy’s A5 and Muscles’ AQ to knockout Chrissy and cripple Muscles. A big chip up for Doc.

Muscles AA was then cracked by Ann’s QQ. John out 8th.

Ann doubled Mark up for some much needed chips after his earlier hand with Jason.

Ann then doubled Jason up QQ>AJ

Ann’s KQ lost to Mark’s A10 boat over boat for another double. Mark was short after he lost another all in against Jason KQ<AQ.

With his third place finish, Jason Barnett has moved to the top of the leaderboard.  He’s ahead of Allen Wiseman by a few points.  Other members moved up and it’s getting pretty bunched up.  Anyone can break out and move into the top 5!  With Steve T. gone for another couple of weeks we all have a chance!!!

We missed you Clive!

We missed you Clive!