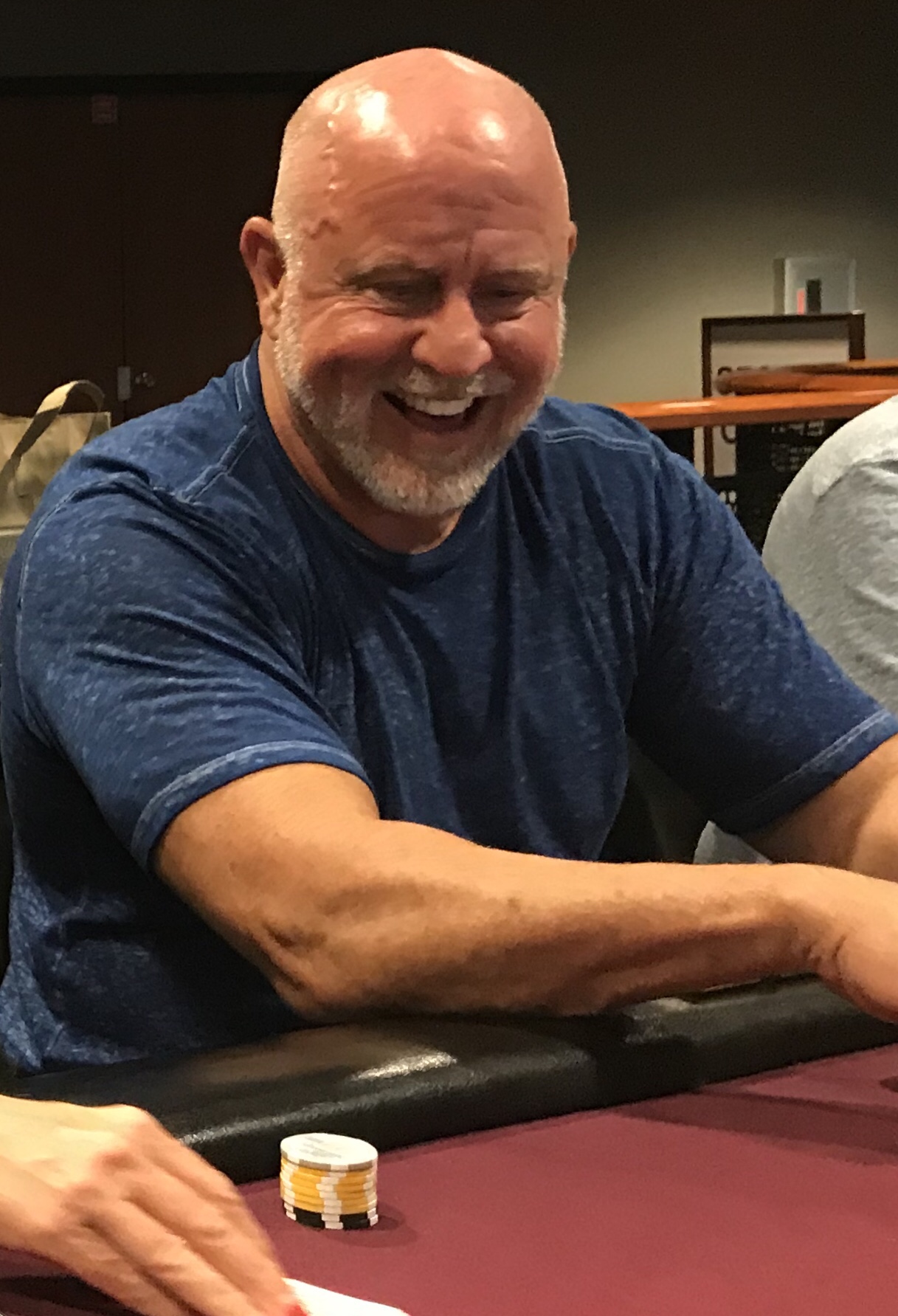 It was “Quads Week” at the league this week.  It took no time before Super Dave Kaucher’s Aces were cracked by Gene’s Quad Fives!  It was announced that the high hand during the first level would receive tickets to the Bucs game – a pretty awesome prize – and Gene immediately achieved the goal with his quads.  Super Dave may have rebought….

In another hand at the feature table shortly after Gene cracked SuperDave’s AA, at 100/200 Andra raised Preflop to 500 in the small blind. Doc Brown reraised to 1400, Gene called and Andra decided her 99 might not be good & folded. After Doc shoved on the 8 turn, Gene called with pocket AA. With a Brick on the river Doc Brown got the double. Andra was relieved she found the fold.

John Gordon, who had gotten short stacked tripled up vs Bob & Doc B to begin his ascent to greatness.

Chrissy thought she was done for the night.  With not much hope she shoved her 8T suited.  She had several calls and flopped a Fullhouse! No rebuys for Chrissy who has final tabled 5 of 6 weeks in the league and is in a good spot on the leaderboard.

Gerry, who chopped first week two of the league had  AK> Ed Vanlandingham’s 77 for a nice stack of chips at the outer table.

Chrissy chopped a hand with Muscles with her AK = his AQ.  With 8822 on the board he was a bit worried after the earlier hand.

Bob AK bested Chrissy’s 88 when she was counterfeited by the 99 TT.

Mark Winchell’s  JJ held and Rob Benford’s 99 was no good.

Muscle’s AQ then bested Doc Brown’s 66 for a double up!

The Final Table for week 6 had some that had been there a lot and some new faces.  Everyone wanted to move up on the leaderboard and with Alan Wiseman not in attendance this week everyone was eyeing his top spot on the board – he had 44 points.

Fil’s flush knocked out Matt. All in on the flop. Fil Hit the gutter.

In another hand Fil took James out 9th.   Fil, a notable local player with some major stats and cashes to his credit, was a force to be reckoned with.

Play continued on with such intense play that no one had time for pictures and hand histories. Or in other words, Mark, Steve, Rob and Andra were out.  In the end the final table in order of finish was: