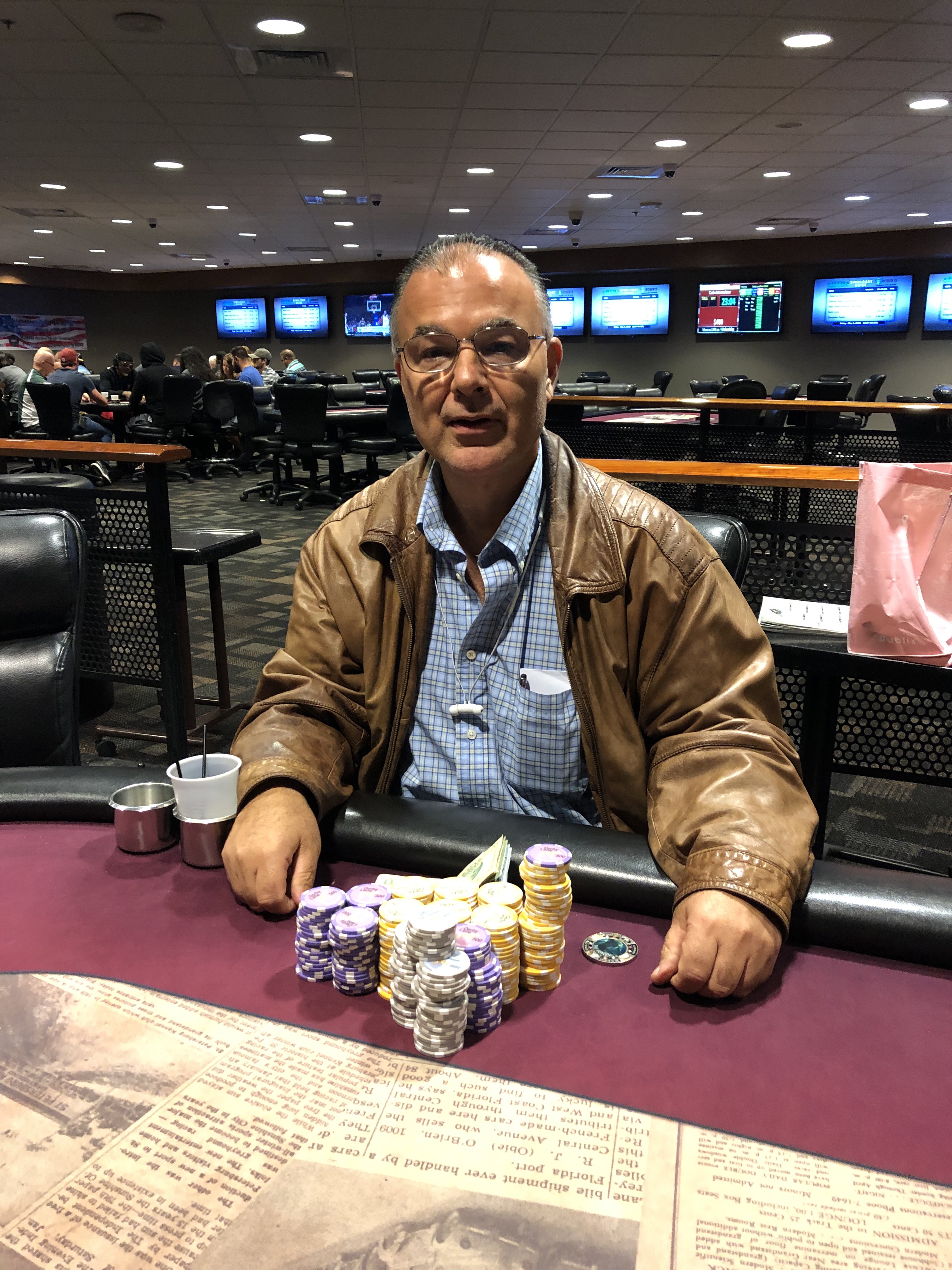 Early on in week 18 Trey was running hot when he hit quad twos!  Trey was in the hand with  Matt and Steve Trizis.

No picture for this one but Jason won. But Jason actually did Chrissy a favor. e won an $11000 pot at 400-800. This allowed her to  make the other Thursday night tourney. He articulated this to her as she was leaving. She did not express her appreciation of the sacrifices he made though. Not very nice of her.

Kenny taking out 2 players (Rob, and Trey).  Look at those hands, an example of the solid play at the Elite Tampa Bay Poker League!!!!

Double up for Gene. Courtesy of Marv.

In the end, the Godfather of the League, Steve Trizis, who has been in a prop bet with “the Duckman”, Marv Karlins, and League Alum Dave Bennett to look good in case he makes a televised final table at the WSOP so people don’t compare him to Shaun Deeb, was the big winner of Week 18.  Steve will definitely be representing the league at the Main Event this year with this win.

League members represented the TBEPL well Sunday at the Hard Rock with three of them – Steve T, Karl Man & our blogger, alum Andra Zachow at the final table battling to win a WPT Deep Stacks seat. Andra finished 2nd but negotiated for the seat. Andra gave full credit to the skills she learned in the TBEPL.

The window was pretty active early in week 19 as many league members chose to rebuy this week with the battle heating up on the leaderboard.  Seven rebuys.  Anyone with 56 points after this week could still get a seat in the Main if they win the last two weeks (and some other people don’t get points).

Doc Brown chipped up early with AA> Marv’s KK and sent him to the rebuy window.   Jeff folded and missed the opportunity for straight.  Mark said “We don’t care what you folded” (even though he wasn’t at their table.)

John “Muscles” Gordon doubled through Rob “The Professor” Benford when both were short stacked.

Herb doubled through Muscles for a HUGE pot.

Edie Jo doubled through SuperDave Kaucher when she got her set. SuperDave’s A5 off no good!  Note to SuperDave:  They weren’t suited.

We then had our final table.  It was going to be a BATTLE ROYALE!!!

Mark shoved for about $20K +\- & Mo, with a pretty nice stack,  tank called thinking he has some sort of magical powers. He didn’t.

The players told Matt that The Duckman would be proud. Quack Quack

Doc Brown AJo>Landon AKo and he took back his chips.  Landon was out 10th.

Matt 66 held agains Mo’s AK for a double up.

The short stacks were not going anywhere at this final table.

Mo was then All in with A6.  He doubled through Matt.

In another hand, Muscles, who had a HUGE stack this point took Aaron’s pulse & decided to fold.  Another skill obtained by playing in the Elite Tampa Bay Poker League.

Edie Jo who needs some points to move up the leaderboard lost to Mo’s 33, Edie Jo out 7th.

In the end the Week 19 results were:

Mo Maher/Aaron Thivyanathan chopped 1st to give them both some much needed points!  Aaron has now moved into the top 10!

John Gordon 3 – Now in 3rd place overall on the leaderboard as well!

Don Brown 5 – now getting closer to the top 10 after a good finish last week as well!  He is currently 13th.

Mark Winchell 6 – some much needed points to keep him in the mix.  Now in 12th place – down one due to Aaron and Matt pulling ahead. Only 2 points behind top 10.

Edie Jo Norman 7 – Currently in 14th on the leaderboard with some much needed points.  Only 5 point behind top 10.

Rob Benford 8 –  In 20th Rob needs to finish at the top or close to it these next two weeks.  This is entirely possible with his strong finish the last few seasons.

Landon Brown 10 – Landon is currently in 5th place with several league members on his heels.  He needs to fortify his standing with some top finishes these next two weeks.