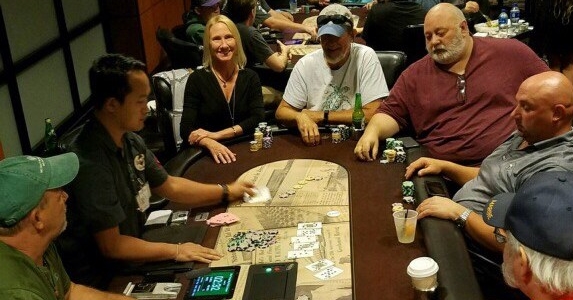 Another week is on the books and there are 5 weeks left for the Fall season of the league.  Though some members are taking a good consistent lead in the standings, namely Steve, Don D, Barry and Tonia, the remaining top 13 currently are 1 win away from being in the top 5 and winning a Main Event Seat.  With 5 weeks left, the top remaining 17 are one win away from a minimum of top 10, and, if there is a hot streak of multiple wins or a combination of wins and final tables, any player that is still there every week could actually pull off a top 5 finish.

Chrissy passed out a sign up sheet to gauge interest in our Elite Poker League season end dinner on Wednesday, December 6th at a location tba based on how many plan on attending.  Rumor has it that there may be some special awards.  If you didn’t already do so, let Chrissy know if you plan attending and if you’ll be bringing a guest.

This week had some interesting play with 3’s consistently showing up on he board after Darryl claimed that he had a good feeling about 39 this week.  Every time he bet out there was some fear of his potential 39 full house.  He parlayed this fear to a 9th place finish this week.

Fil sported his “Main Event” mustache this week that he says, similar to the playoff beards in hockey,  he WILL NOT SHAVE OFF until he wins a Main Event seat.

It seems to be working as he made the final table and finished in 10th Place where he is one win away from top ten in the league.

The play of the game came when the tables combined to two and there were three in a hand including Sherry and Allen Wiseman.  Blinds were 200/400 and three were in after a min raise to 800 – Allen defending his big blind.  The flop had a potential heart flush.  There was a 1200 bet, Sherry called and Allen, who

was getting low but not that low, shoved.  Sherry looked at Allen with disgust and said “Really Allen?!!!”  Allen smirked and said “I had to play it honey.”  Sherry responded “Shut up Allen!”  and folded.  Allen showed two pairs with his J7 off.  The caller had a flush draw and Sherry had the Nut flush draw. Allen said “I had two pair!” Sherry said “Shut up Allen, you don’t have to defend the big blind with that shit!”.  There may have been a couple of other “Shut up Allens” in the conversation.  They did leave together but there is a chance he’ll be having take out all week.  We’re hoping they have a comfortable couch as well.

In the end it was Gino winning first to give him 4 final tables this season but with 2 seconds, and this first he has moved up to 13th place and is one win from top 5.   Rob Benford’s consistent final tables have moved him up to the top 5 and Tonia’s 4th has solidified her top 3 standing.  Despite Allen’s shenanigans, Sherry is still in the YTD season top ten.

This week’s final table in order of finish is: