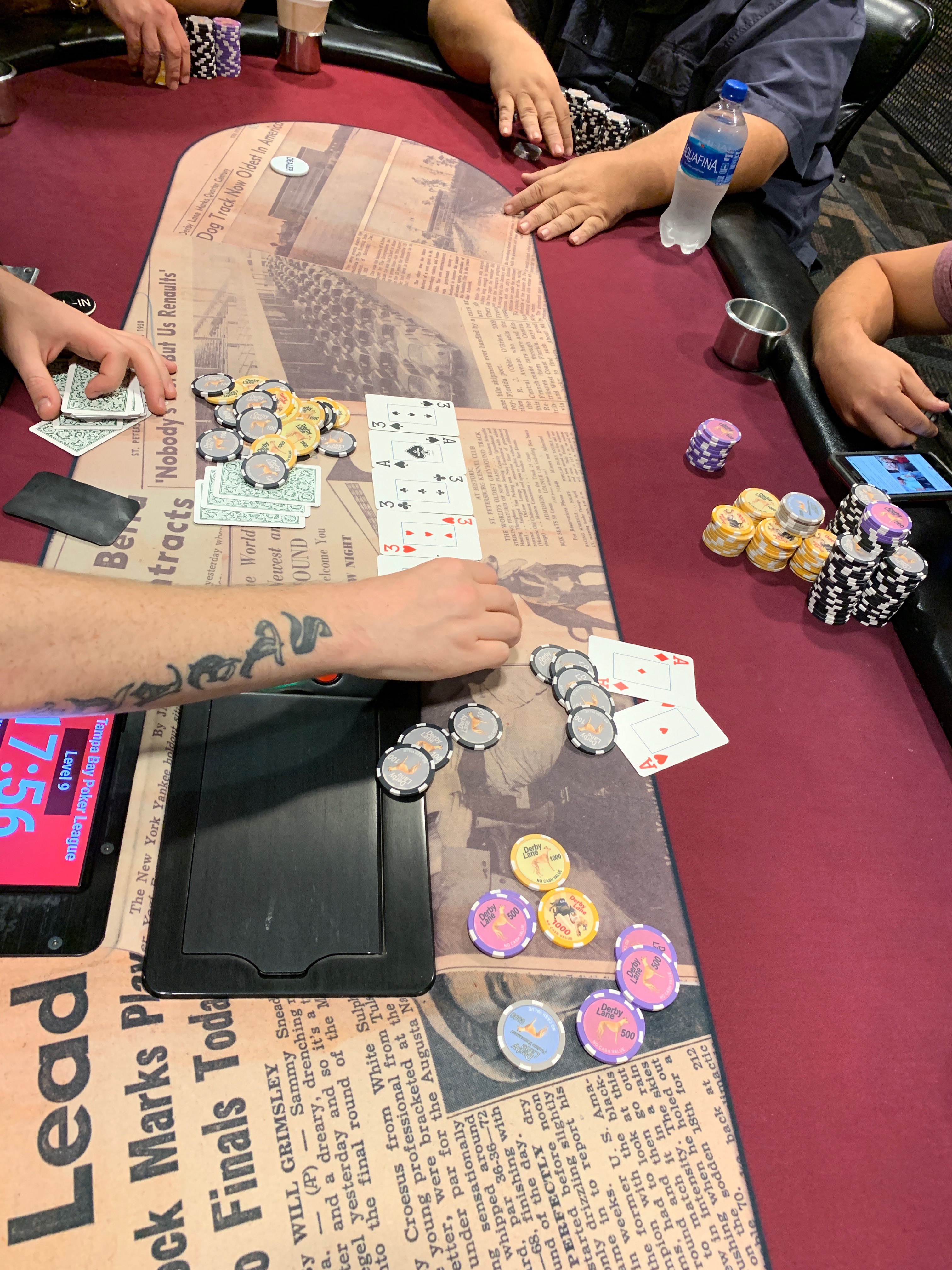 We have our winners!  Steve Trizis remained first on the leaderboard after a bust and a rebuy and rebust during week 21.  He had such a lead that no one could catch him. He just felt like he should donate money this week.

We had seven rebuys during week 21 as the players battled for a package. It was a very close contest for the minor packages as well as the final main package of 6 being awarded for the spring season.

One of the early hands had Kenny chopping with Matt all in after the flop.  Very anticlimactic start to the week!

Jacob then knocked Aaron, who was in the running for a minor seat going into week 21,  out

Then Jacob knocked Jason Barnett, who had moved up materially in the standings last week and had hopes for the final Main Event package, out.  Jason represented the league in the 2018 WSOP Main Event.

Jason rebought since there was still plenty of time!

Kenny’s 77 was no good when Doc Brown’s 99 held.  Kenny had an amazing run through most of the season (until the Godfather Steve Trizis shut that down) and already has guaranteed a Main Even seat.

Dugg AK then bested Kenny ‘s A10 when the K gave him the best pair.

Kenny K6 offsuit >Edie Jo Norman’s black QJ – The King high was good! Edie Jo didn’t let it bother her and she continued on to the final tale by the end of the night.

Edie Jo then “leveled up” when her  AA > MOs flush draw.  Another A and three 3’s didn’t hurt.

The Final table was set:  (and yes that isn’t photoshopped –  Herb was watching “Cheers” throughout the game.   It’s kind of like Derby:  “Where everyone knows your name”. Your welcome Herb for not photoshopping what some have suggested might be funny onto the tablet screen, not that it’s too late….)

In the end the final weekof the League results were:

See the next blog post for the final results (pending the freeroll next week – 2+packages available for that for players who qualified by playing the required 16 weeks and 3 of the last 5 weeks).

See the Spring League standings page for those that qualified. We expect about 14 players as some will be headed to Vegas already or have other conflicts.   Who will win those packages? It’s a clean slate!